Comrades and residents may be interested to know that the now-famous Charlbury Debating Society convened in a packed and tense Corner House on Friday evening.

After a highly charged exchanges of views, the motion, "Today's media undermine democracy as much as they defend it", proposed by Alasdair Ross and opposed by Kieran Cooke, was defeated by 19 votes to seven, with three abstentions.

There are only a few remaining local tickets for the 2013 Wilderness Festival.

If you have an OX7 postcode, you will be able to get tickets from the following outlets for just a short time longer.

BBC Radio Oxford is to feature Charlbury all this week, with interviews with local people and stories about the town. The coverage starts at 7am on Bank Holiday Monday and continues on the breakfast show and the Malcolm Boyden show all week.

Charlbury Surgery need volunteer drivers to take patients to their hospital appointments. If you would like to offer your help please contact either Ginny Hollow or Sandra Jeffs on 01608 819323 or alternatively email them at ginny.hollow@nhs.net or sandra.jeffs@nhs.net 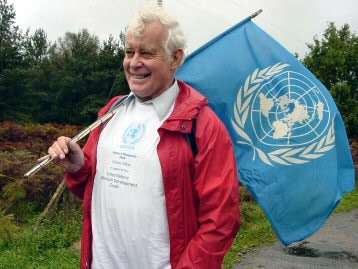 We are very sorry to report that Malcolm Harper, of Church Lane, died on Thursday afternoon. He was 73.

Malcolm worked for Oxfam for 18 years, on the ground in Africa and Cambodia. He was Chairman of the United Nations Association in the UK and involved with many other charities to promote international understanding.

In Charlbury, Malcolm was President of the Cricket Club, organised regular talks on international issues, and an active member of St Mary's Church.

Please keep Ann and his family in your thoughts and prayers.

Here is a preview of Wilderness 2013 from Witney TV: www.witneytv.co.uk/videos/wilderness-2013-launch

The Conservatives have retained Charlbury's seat on Oxfordshire County Council - but lost overall control of the council.

Following boundary changes, the councillor for Charlbury & Wychwood will be Rodney Rose. The results were:

The 9% margin was the closest in Charlbury since an earlier set of boundary changes abolished the old Labour-held Charlbury & Stonesfield seat.

Of the 64 seats on Oxfordshire County Council, 31 were taken by the Conservatives, 15 by Labour, 11 by the LibDems, two by the Green Party, and four by independents.