As well as the redoubling work, the Cotswold Line is soon to get new screens and automated announcements as part of a new "customer information system" - finally replacing the notoriously unreliable screens first installed by Thames Trains.

Work is currently underway to install the screens at stations along the line.

The Cotswold Line Promotion Group's AGM heard details from Network Rail of when the line will be closed for further redoubling work.

Next year, the line between Moreton and Oxford is expected to be closed from May 28th 2011 to June 5th. In addition, the last two trains on midweek nights, in each direction, are likely to be replaced by buses between December 13th and May 20th.

There will be a single-day closure on Sunday June 27th this year. There are more extensive closures west of Charlbury throughout the period.

The double track through Charlbury will be ready on June 6th 2011, when First Great Western intends to start an enhanced service with more trains from Oxford to Moreton. A full revised timetable will take effect in September once redoubling further west is complete.

(Information taken with thanks from the unofficial FGW discussion board which contains full details.)

The Town Council will be holding "surgeries" on 5th June, 3rd July and 4th September in the Corner House, from 10am to 12pm, in the Morris Room and Watney Room. Now is your chance to ask your town councillors for their help or just a questions.

Please also see our new website, at www.charlburytowncouncil.co.uk. All updated news, agendas and minutes will now be posted there, and not on the Charlbury website.

Oxfordshire County Council has confirmed that the "recycling centre" at Dean Pit is to close next year.

A replacement facility will be provided at an as yet undisclosed, but nearby location. The ever-lively chippingnorton.net speculates that it will be at Enstone.

There will also be a new recycling centre at Langford Lane, Kidlington.

With reference to the concern that with Worths no longer operating their buses after May 29th, the Thursday morning route into Witney for the market might be overcrowded on the smaller, RH buses. Alan Field, Bus Services officer for OCC, confirms that he has spoken to RH and they are aware that there might be a problem, in which case RH will put on a larger bus, which will have been used earlier for a school run.

There appear to be rumours about the future of the RH X9 service, but as far as Alan Field is concerned, he is not aware of any intention by RH to pull out of route X9.
In any case, their contract runs until 2012. Helen Bessemer-Clark, PTR, Charlbury

Thames Valley Police has been receiving reports of a man visiting properties claiming to be from the electricity board.

He engages the occupant in conversation about being over charged. There is the possibility that he is producing two counterfeit £50 notes to get the occupant to give him change. Most incidents have been reported on a Wednesday.

If you receive a similar visit, be sure to ask for identification. If you do not believe the caller to be genuine, do not let them in and telephone the police on 08458 505 505. 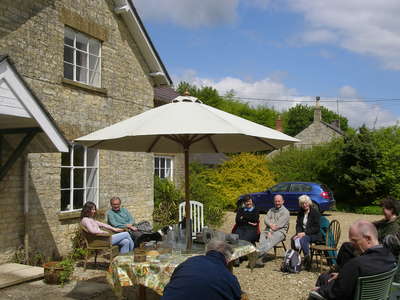 After the soaking suffered in 2009, a total of 14 walkers (and two well behaved dogs on leads) were relieved when this year's Boundary Walk took place in dry, if somewhat chilly, conditions on Sunday.
The number at the start included two American students from Oxford who continued with us as far as Fawler Road. They were somewhat fascinated whole idea of the walk - and by the many Roman snails found along the river bank. Our Vicar, Judy French, joined the party at the start of the Salt Way, kept us company for the lunch stop at Ditchley and continued as far as Spelsbury.
Not only was there no rain, but by 4 o'clock as we returned across the Mill Field the afternoon turned bright and sunny - a satisfying end to a satisfying day.
Tony

There have been several reports of vehicle thefts in Chipping Norton area over the last couple of months and the neighbourhood team is currently investigating the incidents. With the lighter nights we are experiencing theft from vehicles, especially those parked up in our local beauty spots. You are reminded to ensure you do not leave any valuable items like handbags and sat navs inside your car and to take them with you.
If you have witnessed any incidents of vehicle theft or have any information please call us on 0845 8 505 505.

Worths Bus Service to be Discontinued

"It is with great sadness that we learn that the Worths Bus Service from Chipping Norton, through Charlbury, to Witney will be discontinued from Saturday May 29th, due to economic pressures, since it has not been possible to compete with the subsidised RH service. Those of you who have enjoyed travelling with Worths Buses, and have grown to know the drivers as friends, may want to mark the occasion by making a special journey with them on May 29th. Worths emphasise, however, that they will still be continuing their Private Hire and Contract work "

Hydac have announced that they will move from Charlbury in September to the former Alden Press premises in Witney, the Witney Gazette reports. Ninety staff will move.