The West Oxfordshire Locality Forum's "Have Your Say" meeting in the Charlbury Memorial Hall on 15 November elicited wide-ranging views on Oxfordshire health services. Much of the success of the event can be attributed to the organisation and publicity provided by members of the Forum Steering Group who live locally.
People were invited to share their experiences with Steering Group members, and with staff from organisations that provided information stands. These included Age UK Oxfordshire, Carers Oxfordshire, Dementia-friendly Charlbury, the MS Society, the Lawrence Care Home, West Oxfordshire District Council and Healthwatch Oxfordshire.
Attendees also had the opportunity to write down their experiences. Of over 70 people who attended ?" from families with children to young adults and older people -- 31 chose to leave their contact details, 44 provided lengthy written submissions and 65 gave short comments. We believe that this is something of a record for this style of meeting.
Matters that were raised by many people included:
• A very good level of satisfaction with the health service provided generally, but some difficulty in accessing convenient appointments with a preferred GP
• Praise for the Minor Injury Units but concern that not enough people know what they offer
• There was much praise for consultant level treatment in all Oxfordshire hospitals, but some instances of sub-optimal aftercare. Complaints focussed on referral pathways that result in delays and possible deterioration of a condition. Many people had experienced problems with the appointments system.
• Transport to hospitals was highlighted as problematic: need to arrive very early to find a parking space or make a very complicated journey by public transport
• Treatment by NHS therapists was much appreciated, but often difficult to access in a timely fashion.

In general, there was much local appreciation of the health service, marred by some failures of communication. Many people felt that NHS professionals were being let down by faults in the system. The Steering Group was gratified that keeping well/prevention messages were well received at the event, with many people recognising the need to take responsibility for their health.

We warmly thank everyone who took part, and will ensure that the results are transmitted to Healthwatch Oxfordshire, to GP commissioners and to the Oxfordshire Clinical Commissioning Group. They were scheduled to discuss a summary of the comments at a meeting on Tuesday 20 January. People who left their email addresses at the event will receive a copy of the report.

Further "Have Your Say" public meetings are in preparation for Carterton, Eynsham and other centres.

We thought we'd check out how many visits the Charlbury website has attracted in that same time, and are delighted to report that it's reached 263,000 - three-quarters the West Oxfordshire total, for just one small town.

The site typically attracts between 5,000 and 6,000 unique visitors every month - where a "unique visitor" is one person viewing the site on a single computer or phone, counted just once even if they return repeatedly within the month. July and August are the busiest months, largely because of festival visitors and other tourists, while the winter months are the quietest. (Visitor numbers are counted by a program called Piwik running on our own server, rather than handing the browsing data over to Google as many sites do.)

In 2015, we'll be unveiling a complete rewrite of the code that makes the site run, and greatly expanding the features available to authors of community pages.

The Charlbury website is run entirely on a voluntary basis, and receives no funding other than a kind donation from the Garden Society which helps to pay for the domain names. Most of all, it succeeds because of the messages - events, news, adverts and forum - that Charlbury people post on the site; thank you to everyone who continues to make it a success.

The Gruffalo in Charlbury

Former Children's Laureate Julia Donaldson - perhaps best known as the creator of the Gruffalo - entertained several hundred children and parents at Charlbury Primary School on Saturday 17 January. The two sell-out performances were in aid of the Charlbury Community Centre Appeal, and you can find out more by going to

The following planning applications have recently been lodged. Click on the address to see full details at the WODC website.

The Wilderness 2015 discounted tickets for OX7 3 residents are selling fast and will sell out soon. There are still some available, exclusively from Charlbury Post Office. Going, going... nearly gone!

The return of the Pizza Van has been confirmed for Monday the 2nd February at the same times and the usual spot at the Spendlove site.

The Trustees of the Gifford Trust are grateful for the continued support of the traders & their contributions to the charity.

"All you need to do is put your tree - and any other greenery such as holly, ivy and wreaths - out on the correct garden waste collection day, from Monday 5 January.

"Cllr David Harvey, Cabinet Member for Environment, said: 'It couldn't be simpler, all you need to do is put out your tree on the right day and you'll be making sure it gets recycled locally into compost. If your tree is taller than 5ft, simply cut it down into more manageable sizes to help the collection crews.

"'You don't have to be signed up for regular garden waste collections. All real Christmas trees left at the kerbside will be collected and this is just part of the work we do to offer a fully comprehensive service for residents and increase recycling as much as we can.'"

The following planning applications have recently been lodged. Click on the address to see full details at the WODC website. 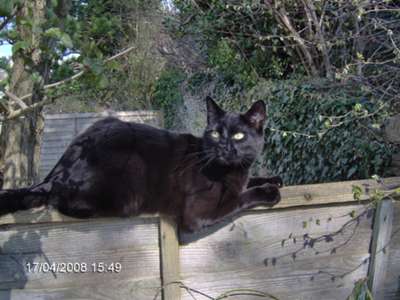 Ebony went missing from Nine Acres Close on 6th January around mid evening this is unusual behavior especially in winter. He is a completely black streamlined cat. Ebony does tend to go Down the nature reserve behind Nine Acres lane and the close. If everyone in that area could check sheds and garages to make sure he is not shut in. Also anyone who has an allotment plot round the back of The Close please check your sheds.He is Chipped so can be identified by vets. Ebony has now been missing for almost a fortnight but we are still hopefull he will be found
Any Information please ring 01608 810728 or 07792403924. And ask for Chris Or Judy. 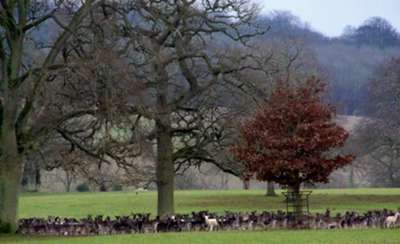 Thought I'd like to share these lovely shots of the Fallow deer that I was able to take this afternoon. They posed for about 20 minutes and then flew off at speed, leaving me feeling so glad to live in this wonderful part of the country.