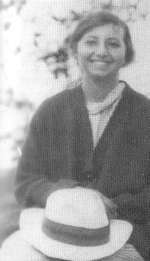 We are sorry to report the passing last week of Grace Fredericks, Charlbury's oldest resident, at the age of 102. Grace was a well-known figure around Charlbury and celebrated her 100th birthday just a few years ago with a very well-attended party.

In a letter to the Charlbury Chronicle in 2003, she described herself as "a woman who has lived through nearly the whole of the last century and has seen many changes come about". She had attended Oxford in the 1920s and would often cycle to visit her sisters Julie and Daphne at Cambridge - a tale told in the recently published book Bluestockings (from which this picture is taken). She will be sadly missed.