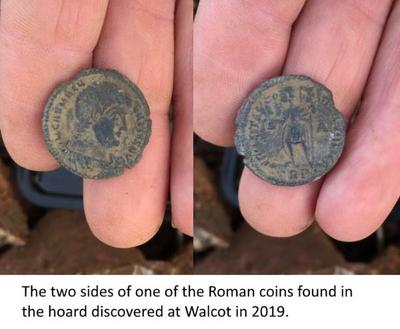 The History of Charlbury through .... secrets of the soil

Saxon bones, Roman coins and life on the land

The fields and countryside around us often hide traces of early settlers who have left no written records or surviving buildings. Today the hamlet of Walcot may seem a small outpost to Charlbury but recent discoveries have shed important light on its past. A new film, the brainchild of Rob Stepney who lives in Walcot, brings this history to life.

Rob Jackson spent much of his working life on the Cornbury estate farming for Oliver Watney and Lord Rotherwick. Interviewed by Rob Stepney, he tells how in 1981 he unearthed a skeleton while ploughing in Spring Piece field. Buried in a crouched position and with some children’s bones nearby, the burial was marked by a huge stone. The skeleton had been buried with a dagger and a spearhead* leading it to be nicknamed the Saxon warrior. Its discovery caused quite a stir with much coverage in the local press.

The field near the stables at Walcot Manor is called Horse Ground and many farms still used horses alongside tractors into the 1950s. Horseshoes still surface in the fields nearby. Rob Jackson recalls how the land was farmed 40 years ago, with mixed farming and small fields. The 1970s brought more intensive arable farming and with the use of larger machines, many hedges were removed to make bigger fields.

Ploughing eradicated some features in the soil. Rob recalls that when he was a child the remains of Walcot medieval village were still visible between the bridleway and railway line. It is thought there were 17 huts there in the 14th century. Walcot Manor also had a Park attached to it surrounded by a stone wall, but this land is now given over to crops.

Roman coins and pottery have surfaced from time to time in this area. In 2019 metal detectorists obtained permission from Cornbury estate to explore the field above Walcot cottages and unearthed a hoard of Roman coins dating from the 4th century. About 50 or 60 bronze coins had been buried deliberately, probably for safe keeping in troubled times. The hoard is being studied by the British Museum and it will fascinating to hear the results of their analysis.

When you walk along the bridleway to Shorthampton, imagine how Romans and Saxons passed this way before you, and medieval villagers lived nearby. As Rob Jackson says, no one really owns this land but we merely keep it for a while before passing it on to the next generation.

To view the film on Youtube, follow this link or paste into your browser (If it opens with an advertisement: press Skip Ad when prompted and the film will start):

The film will be shown as part of the Charlbury Festival in June 2022.

* The dagger and spear are on display in Charlbury Museum