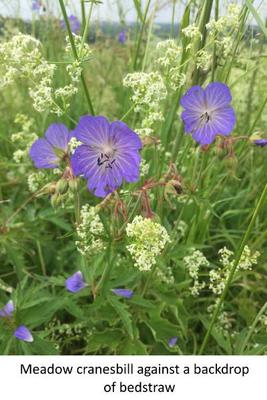 The History of Charlbury through ..... a year of wild flowers

If you open a copy of January’s Cotswold Life magazine, you will find a colourful 5-page spread of photographs taken by Walcot resident, Rob Stepney. Like many of us during the pandemic, Rob spent many hours walking the local footpaths. One of his favourite and most regular walks is along the bridleway between Walcot and Shorthampton. Rob found a wide variety of wildflowers growing along the bridleway despite it being just a narrow strip of limestone grassland with intensively cultivated fields on either side. Over the course of twelve months he made a photographic record of the flowers which came and went through the changing seasons. Some, such as the pyramidal orchid, made a fleeting appearance in June while others like the meadow cranesbill flowered for many months.

The year started with the early appearance of winter aconites, followed in March by white violets and celandine. Summer brought meadow cranesbill, bedstraw, woundwort and agrimony among many others. Rob was also struck by the variety of insect life feeding and finding a home along this narrow strip.

The museum is delighted that Rob has given us copies of his photographs to add to our archive. They will join earlier records of the flora of the area, including Anita Jo Dunn’s detailed work on the plants to be found at Ditchley. We have a survey done in the 1980s which recorded over 300 different plants growing wild within a mile and a half radius of St Mary’s church. And on our bookshelves you will find the work Alan Spicer undertook on local hedges, along with the invaluable walking guides which he co-authored, illustrated by Louise’s delightful drawings, and which include so much information about the wildflowers to be seen in the area.

We are fortunate to be adding Rob’s records to these, giving a snapshot of the species which are to be seen locally now. It will help draw up a picture of what is happening in the countryside around us and how modern use of the land is affecting nature, as well as making us all more aware of the plant life to be found on our doorstep. Rob writes: “Now that farmers are being encouraged to reinstate headlands and hedgerows, this narrow stretch of uncultivated land is a powerful example of the flora we could see more of – and the insect life that comes with it.”

Rob’s photographs can be seen in sequence by following this link: www.youtube.com/watch?v=HZ0Jyn95lRo

Rob’s photographs are printed in the January 2022  issue of Cotswold Life magazine.