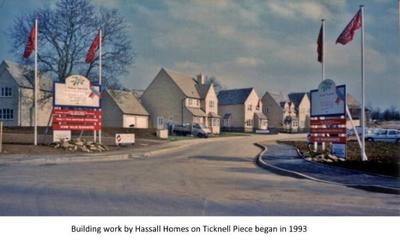 The History of Charlbury through ... the growth of the town

Articles about Charlbury are nearly always illustrated with pictures of the centre of the town with its historic stone buildings. And yet it is overwhelmingly a modern town, with a huge increase in housing taking place in the 20th and into the 21st century.

In the first half of the last century houses were built along Enstone Road, Woodstock Road, and Hundley Way. At the end of WW2 there was a great need for improved housing stock. In 1947 the Town &Country Planning Act came into force, replacing all previous legislation. The same year a survey of Charlbury houses with a rateable value under £20pa found that 58 houses depended on external taps for their water, 33 houses depended on external wells and 4 had no water at all within a reasonable distance. 145 had no toilets, relying on pail or chemical closets. Mr Hughes came round with his trailer collecting the contents of the closets, along with rubbish and ashes, and took it all to the dump near the quarry.

New housing was needed to improve living conditions. This started in 1947 with housing along one side of Sturt Road, followed in the 50s by more building along the other side, and the construction of houses and bungalows to form Hughes Close and Sturt Close. Housing also went up along Nine Acres Lane, which until then had been a narrow lane with high walls. One of the first residents to move into Nine Acres Lane remembers what it was like after living in a small cottage on Market Street. “[There] we had a closet across the yard at the back and water which had to be pumped from the well. The new house was light and spacious, with a flush toilet and water taps inside. It changed our whole way of living.” (Anon)

Walking round the streets of the town today it is evident how much Charlbury expanded in the 1960s and 70s with the development of The Green, Woodfield Drive and surrounding streets, Lees Heights & Close, Little Lees and Sandford Park and Sandford Rise. It brought huge change to the town. Smaller additions and some infilling happened in the 1980s and then the next sizeable development was Ticknell Piece in the 1990s. Infilling also became more common with new houses built in the centre of town. Through all this change, the older street pattern remained little altered although The Slade was widened to become the major through road that it is today. Long-time resident Mr. Wootton who lived in Crawborough always referred to it as “the bypass”.

Rod Evans: A whistle-stop tour of the planning system.

Rod will explain how development is controlled and enforced and give an insight into how planning policy is formulated.  Full details on Events page.

To join the Society email treas.charlsoc@gmail.com