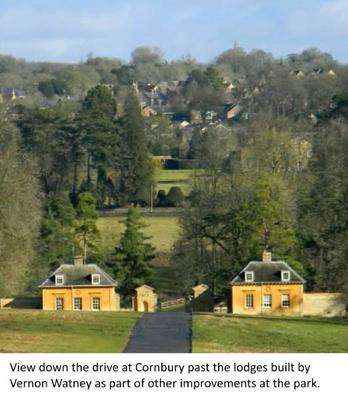 The History of Charlbury through ....Cornbury Park & Wychwood

The history of the Wychwood Forest and Cornbury have always been closely entwined. In the middle ages the royal hunting forest of Wychwood occupied much of what is now West Oxfordshire. Cornbury too was once a royal forest but in 1312 was referred to as a park, meaning it had to be enclosed by a wall or fence and ditch. Then in 1337 comes the first mention of a house there – a lodge of stone and timber, paid for by the Royal Exchequer.

Cornbury remained royal property until the 17th century when in 1642 Charles I gave it "for ever" to its then tenant, Henry Danvers, Earl of Danby. (This was the same Earl of Danby who twenty years earlier had given land in Oxford for the creation of a physic garden, now the Oxford Botanic Garden). Danby enlarged the house at Cornbury in the 1630s, building what now forms the south wing of the present house. Following the Restoration the house went to Edward Hyde, who made extensive alterations. In 1663 the large stable facing Charlbury was built, and in 1665/6 the eastern wing of the house, while John Evelyn advised on the planting of the park.

The estate remained in the Hyde family's ownership until 1751, when it was bought by the third Duke of Marlborough and known as Blandford Park. It later passed to the Churchill family on the 4th Duke’s death in 1817. It’s sale by Viscount Churchill in 1896 marked a major break with the past as the estate passed to ‘new money’, rather belatedly mirroring the rise of industrialists in society. It was bought first by Harvey du Cros, who founded Dunlop, and then in 1901 by Vernon Watney, a member of the Watney brewing family. The Watneys made major alterations to the estate, including building the lodges which now flank the main approach to the house. He and his wife Lady Margaret took a great interest in the life of Charlbury, actively supporting many local clubs and societies and hosting large social events at the house, including for the WI, local schoolchildren and tradesmen. In January 1903 about 120 Charlbury tradesmen attended a dance and supper there. The evening was a great success and after a generous supper and a vote of thanks to the Watneys “ dancing was then resumed to the strains of Messrs. Russell’s Band and was kept up with great spirit till about 4.30am”. Oxford Times 7 January 1903

Join the Charlbury Society talk on Thursday 7th October on Zoom to learn more about the history of Cornbury Park and the Forest. Speaker is Dr Simon Townley, editor of the Victoria County History for Oxfordshire. See the Events page for details.