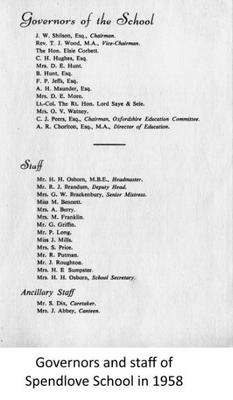 In the 1950s in Charlbury, a new secondary school was urgently needed to replace the overcrowded County School on the Playing Close. Plans and a model of the new school to be built on the School Gardens were displayed at a public meeting in 1955. The new School opened at Easter 1958 with 300 pupils, serving not only Charlbury but also children from Leafield, Stonesfield, Finstock, Fawler and Enstone. There was controversy because people preferred the School Gardens to the startlingly modern building. The museum owns a brochure prepared for the "Evenlode Secondary School" dated 1958, but the County Council chose the name “Spendlove Secondary Modern School”. There was a bungalow for the caretaker and a popular Further Education Centre with a variety of evening classes. The School opened formally in May 1959 and in 1960 the Wychwood House paddocks were bought to provide a school playing field. Did the child-beater transfer to the new school? Perhaps someone can recall …

From February 1959, pupils won numerous GCE awards and County Tests of Achievement Certificates. Tennis and cricket coaching began. Pupils visited the West Oxford Tech, the Leafield Radio Station and factories in Witney. The new Head, Mr Larder, introduced regular outings to women’s hockey matches, concerts and the theatre in Oxford and Stratford. Various well-known musicians visited, including James Blades (percussionist), Leon Goossens (oboist), Carl Dometsch and Joseph Saxby (recorders & viol). There were school trips to France, Bavaria and Switzerland, and sailing lessons at Farmoor Reservoir. In 1963 after much fund-raising the Swimming Pool was formally opened by the Marquis of Blandford. John Moore, who taught Biology & Rural Studies from 1975, remembers garden plots and a hen-house on site.

After 1965 the County Council arranged for all children from the area to transfer to Spendlove School for 3 years and then to Chippy or Witney for the rest of their secondary education. Mr Larder proposed that part of Nine Acres might be used to extend the school to cater for 700 pupils, including a covered sports hall, but the County Council had other plans in mind. Despite much local opposition, they decided to close Spendlove School, sell the site and part of Wychwood Paddocks to finance classrooms at the new Primary School on Crawborough; and to use the old Primary School for adult education, the library and a health centre. When the school closed, Charlbury became a quieter place in daytime. A reunion party in 2017 attracted 100 former pupils who still have fond memories of their Spendlove schooling, despite the great heat in summer and the freezing cold in winter!