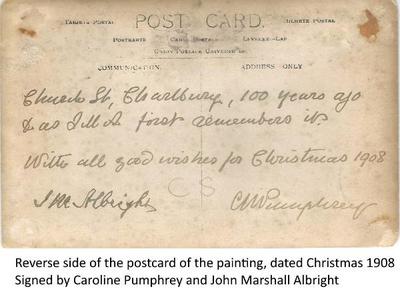 The History of Charlbury through ...an old painting

We have used this old painting to illustrate several of our weekly posts. This small watercolour hangs above the entrance to our gloving exhibition room. Dated about 1800 to 1805, it is a painting of Charlbury, made 200 or so years ago, and so may well show what the town looked like then.

But there are several unanswered questions. Firstly who painted it and why? Apparently, it was common in the early 19th century for jobbing artists to travel around the country painting local scenes and selling them to whoever would buy. There is a very similar painting of Witney High Street, said to be by S Jones and painted in 1828. It even has a man with wheelbarrow in it! A number of similar paintings of Chipping Norton High Street also survive, but without wheelbarrows.

Secondly when was it painted? The museum has recently acquired a postcard of this painting from the late Margaret King. Caroline Pumphrey wrote on the back of the card on behalf of herself and John Marshall Albright (JMA): “Church St, Charlbury, 100 years ago & as JMA first remembers it. With all good wishes for Christmas 1908”. Both then signed the card. John Albright’s signature is clear but shaky –not very surprising as he was 92 years old then, and died the following year.

So was it painted in 1808? Clearly JMA recognised it as a good picture of the town in his childhood. But he was born in 1816, and so it is far more likely that the painting tied in with his memories in the 1820s when he was a child. It doesn’t get us much further with an accurate date, but it ties in with the date of the painting in Witney

Thirdly, is it an accurate picture of the town all those years ago? A contemporary opinion, like that of JMA, is invaluable. Another bit of contemporary evidence comes from the 1761 map of the town. On the map, half way down Church Street, in the middle of the street, is a small building. The painting also shows a small building, some way down Church Street on the right hand side. Zooming in on the picture shows it is a market shelter very like the one at the top of the Street. But this building does not appear on later maps.         More on this painting in a future posting

1  A copy is in the Oxfordshire History Centre

2  Caroline Pumphrey was a Quaker who lived in Charlbury during the 19th century. She wrote her Reminiscences - ‘Charlbury of our Childhood’. JMA was her uncle.