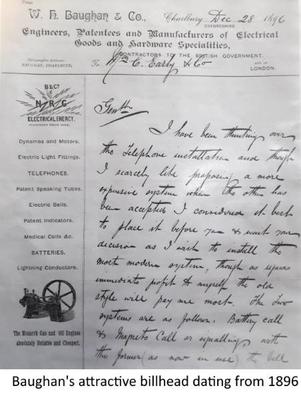 The History of Charlbury through .... the coming of electricity

William Henry Baughan was the third member of his family to run the ironmongers on the corner of Sheep Street and Church Street, where Fairfax is now. He had an interest in the use of electricity, and in the 1883 Kelly’s Directory his was the only mention of an electricity related business. He gave talks and demonstrations about electricity and in 1888 gave a display of his electric train set.

He was quite early in adopting the use of electricity. One of the problems was the need for a generator to produce it. There was no standard supply,

In 1891 he had a Gramme Dynamo (invented by Belgian Zenobe Gramme) to produce electricity. WH Baughan’s dynamo was run from a steam engine and produced 14-16000 candlepower, and could be hired for special events, to light ballrooms, bazaars etc. To advertise it, a 2000 candlepower arc lamp was put on every Saturday night to light up the front of the shop. He also sold incandescent lamps, and specialised in electric bell systems, one of which was installed at Lee Place. He installed a fire and burglar alarm at Ditchley.

A few years later Cornbury Park, which was still lit by lamps and candles, had its own dynamo installed, which could provide for 400 lights.

The Parish council had considered changing to electric lighting in 1895, and again in 1912. In 1929 the Western Electricity Supply Company offered a National Electricity Scheme, a forerunner of the National Grid. There was a public meeting, with a unanimous vote to accept, and the company put in a mixture of underground wiring and overhead cables. The overhead wires were not universally popular, with John Kibble calling them an awful fringe of ugliness. The Parish council then installed electric streetlights, with St Mary’s and the Wesleyan Chapel changing to electric lights in 1930.

The first power cut occurred in March 1930 when an underground cable fused. Ironically, a lecture that evening, entitled Electricity and its Uses had to be cancelled.

The Western Electricity Supply Company offered inhabitants 3 lights and a socket. Janet James remembers her parents taking up the offer and having 3 lights downstairs and buying a lamp for the socket, to provide her father with extra light to work by - he was a tailor. Another lady, Eileen Mitchell (nee Sturdy) remembers the 3 lights and 1 socket cost 1s 2d (6p) a week.

Electricity provided lighting that was cleaner and easier to maintain than candles, lamps and gas, though all continued to be used for a while.