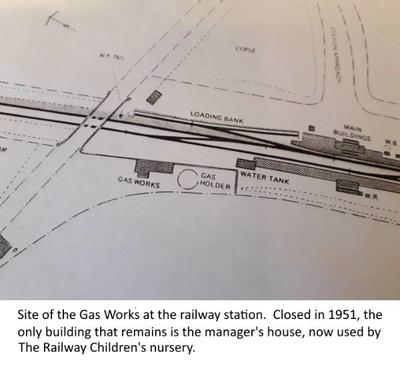 The History of Charlbury through ... gas lighting

By 1853 there was a scheme for lighting the town by gas lamps, but it wasn’t until 1869 that the Charlbury Gas Company was formed with directors John Marshall Albright, Frank Bowly (who lived at the Corner House) and George Martin (former headmaster of the Grammar School). The Gas Works were by the railway station. At that time gas was made from coal, which was easier to transport by train. By Christmas of that year some of the shops were lit by gas for the first time. Some of the public buildings, for example the Methodist Chapel and the Grammar School were among the early users of gas lamps. The Church had installed them by 1885.

There was a meeting on 5th November 1870 to discuss a plan to have 12 street lights. The Gas Company would provide the lamps at £2 each and it would cost £25 to erect them…to be paid by public subscription. A vote was taken, and was 26 to 25 against having the street lamps. It wasn’t till after 1875 that Charlbury streets were lit by gas lights. By 1899 there were 20 gas street lamps and 14 oil lamps. The streets had to be dug up to enable the gas pipes to be laid but at this stage they didn’t extend to the whole town. Hixet Wood and Pound Hill were outside the gas area and had oil lamps.

Gas was relatively expensive and Charlbury was quite careful about its use. The street lamps were only lit in the winter months, and then only for a few hours of an evening. Also they were not lit for 6 nights around a full moon. It must have been quite dark if those evenings were very cloudy, despite the full moon. In 1906 Mr Claydon was paid 10 shillings (50p) a week to light the lamps each week from 1st September to the 30th April. Don’t forget that there was no British Summer Time then so April evenings would be darker earlier than now.

The Charlbury Gas Co was taken over in 1906 by the Mid Oxon Gas Co, and by 1907, after the takeover was completed, it had been wound up. The Mid Oxon rebuilt the works, and extended the mains, causing traffic chaos! A succession of larger firms ran it until nationalisation in 1949. The Gas works by the station was closed in 1951 and the two gas holders were demolished within 6 months. All that remains is the manager’s house, the building now used by The Railway Children Nursery. By this time gas lighting had given way to electric lighting.