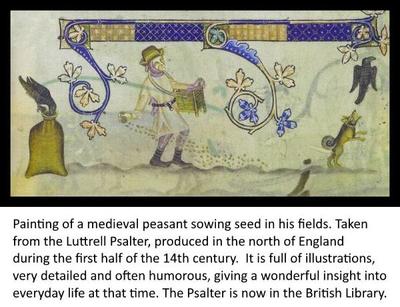 The History of Charlbury through... our ridge and furrow fields

As we have all walked the footpaths around the town over the last year, many people have become more aware of the history written in our landscape. My favourite time to walk is early evening when low raking sunlight and deep shadows accentuate features. In the field just beyond the cemetery, the remnants of the medieval ridge and furrow farming system are particularly highlighted at this time of day.

Medieval villagers depended on growing their own crops to fill their stomachs. As many of you will remember from school history lessons, land around settlements was divided into common fields, often three, where each year two fields were cultivated and one left fallow in rotation.

In Charlbury there were two if not three ‘common’ fields, The map shows one possible arrangement - North Field and South or Home Field with the track we know as Hundley Way dividing them. Lees Rest Wood was also common land. The fields were divided into strips of one furlong (c.200 metres) and people’s strips were scattered between the fields.  The ridges were formed over the years by repeated ploughing which always turned the soil to the right. The ridges were better drained than the lower furrows so suited wheat, while pulses could tolerate the damper lower parts of the ridge or the furrows. In sloping fields, water would drain down the furrows into ditches. Today in some places the different soil conditions are still reflected in the different plant species that grow on the ridges and in the furrows.

Livestock could graze on common land and also in the fallow fields and on stubble after harvest. Pannage was the right to graze pigs on acorns in woodland, usually for a set number of days or specified period each year. The townspeople fought for their rights if they were under threat. In the late 16th and early 17th century this led to clashes with the Lees of Ditchley. A long-standing dispute over grazing rights between them came to a head in 1610 when Sir Henry Lee obtained the right to enclose Abbot’s Wood where he had built Lees Rest. The townspeople fought back and enjoyed their common rights until 1629 when the second Sir Henry Lee again tried to enclose the wood. It seems likely that this time he succeeded as there are no further references to common rights being exercised in those woods.

We’ll look at the enclosure of common land in another posting.