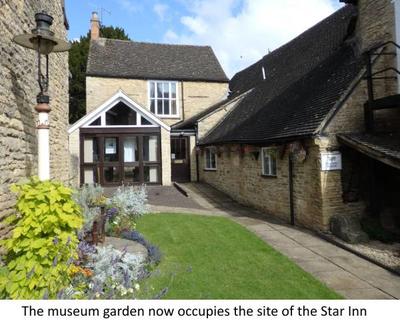 The History of Charlbury through .... the Star Inn

The next time you sit in the museum garden with your lockdown takeaway coffee, enjoying the autumn sunshine, look at the wall behind you. It projects out from the barber’s shop, and is evidence that there was once a building on the museum garden site. That building was the Star, one of a number of buildings in Charlbury that no longer exist. Here is a photograph of it before it was demolished. It looks like a small pleasant building, perhaps less grand than those either side of it.

The Star was owned for about 100 years by the Spendlove-Bowly families who also owned, and often lived in, the Corner House next door. Frank Bowly had inherited both from his father William in 1856, and in the property tax return he made in 1875, he wrote that all his father’s buildings, which included the Star, ‘were very old and in a bad state of repair’, though he did mention some money was spent on the building. The Star was pulled down in 1913, the same year Frank Bowly died. Here is another old photograph, showing the builders finishing work to the wall of the barber’s shop post-demolition.

The Star hadn’t been an inn during the time the Spendlove-Bowly families owned it, but was rented out as a private house. For over 70 of those years, it was let to a family of saddlers and harness makers. Henry Knibbs had it from at least 1841 to his death in 1875. His rent then was £10 pa. His nephew and apprentice Ebenezer Barrett took over until past 1911. Given there were outbuildings, possibly stables, at the back, perhaps they carried on their saddlery business from these premises. It is not clear what happened to Ebenezer and his business when the Star was demolished.

We have records of the Star as a pub or inn going back to 1753, but all its owners/licensees were called ‘victualler’, that is they were publicans, not innkeepers. So it appears that the Star, despite being called an inn, was essentially a pub. However in a sale advertisement in the Oxford Journal for August 1810, it was described as ‘An Inn or Public House’ in good repair, with ‘stabling’. In another sale advert in 1811, the Star was ‘The well- known and good accustomed Inn …now in full trade’ and the auction was held in its ‘Dining Room’. So could it have been a very upmarket pub?

Barbara will be talking about the many old buildings in Charlbury and also later developments and how to research their history.  This promises to be a fascinating talk.  See the Events page for full details.

Open to all members of the Charlbury Society

Not yet a member? Please contact Susan Merry at susanmerry2@gmail.com to join and attend the meeting. Annual sub £8.50/£17 single/joint membership