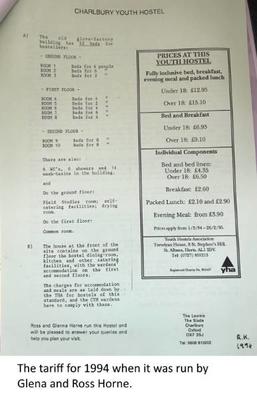 The History of Charlbury through ... the Youth Hostel

The Youth Hostel Association or YHA was formed in 1930, with the aim to ‘help all, especially young people of limited means, to a greater knowledge, love and care of the countryside and appreciation of cultural values of towns and cities , thus promoting health, recreation and education.’

At Easter, April 1946 the Hostel was opened, with the house having been converted into 5 small dormitories, with washing facilities and toilets. Work on the factory building was completed in 1947, and became the men’s dorms and facilities, self-catering area, and Field Study facilities.

All hostels provided accommodation in single sex dorms, usually with bunk beds. Pillows and blankets were provided, with sheet sleeping bags either brought by the hosteller or hired at the hostel. There were self-catering facilities and/or a meals service. The hostel was run by a warden, who lived on site, and a duty (washing up, tidying the dorm, chopping logs, for example) was done by each hosteller. Membership of the YHA was required.

In 1947 one hosteller wrote of her stay “…. Charlbury YH was clean, commodious and well run, with bare floors and bare tables but all mod cons. I was in the attic with 2 other girls. The fire escape was one knotted rope coiled on the windowsill and fixed with a stout staple on an overhead beam. Far below, at the receiving end, was a mound of straw…”

At the end of 1970 there was a decision made to close the hostel, but this was rescinded and the hostel remained open. More work was carried out and family/leader rooms were created in 1984. Then in 1990 it again faced closure. The YHA had put Charlbury hostel, and 18 others, up for sale in order to finance upgrading of other hostels and to pay off some of its debts. The Charlbury Youth Hostel Support Group was formed, with Miles Hardie a key figure in the fund- raising campaign. They were unable to raise enough to buy the property. However, a local couple Glena and Ross Horne bought it and ran it as an affiliated hostel, with YHA rules and prices, for a number of years before it closed finally as a hostel in 2001. Its last use under the ‘Rent a Hostel’ scheme ….. a YHA scheme where a group could rent the whole hostel…. was in January 2001. It was then converted into residential houses.