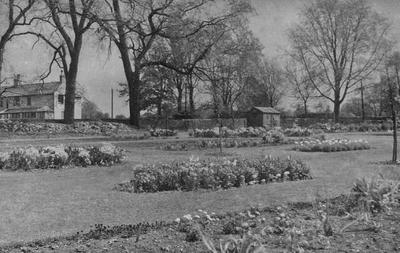 The History of Charlbury through .... the Spendlove car park

If you were standing in the middle of the Spendlove site in 1937, you would not be standing on tarmac in the middle of a carpark, surrounded by cars and buildings, but in a lovely garden! A public footpath ran through the site, as it does today, and on either side were laid out flower and vegetable beds. The path was grass, and was lined with fruit trees, which look quite new in the photographs here, with flower beds between them. There was a rose garden, with ramblers climbing over ‘rustic poles’, and shrubs along the boundary of the plot. There were bee hives, and even poultry. Vic Brackenbury remembers there were six seats in the garden, and it was a lovely place for young mums and older people to meet and chat.

The garden was a school garden, and was maintained by the senior children – the 11 to 14/15 year olds - at Charlbury County School which was on the Playing Close. The site had originally been a meadow, and about a quarter of it was obtained by the school in October 1927, and the rest of the 2 acres in the next year. It had never been ploughed and the boys had to dig it over. They found numerous items, including clay pipes and wig curlers! The boys grew the vegetables for the school kitchens and liked taking them there ‘because the girls gave them a cake or biscuit’ (the girls learnt cooking). The garden had a big tool shed, which the boys in the woodwork class helped erect. It had tools of all sorts and sizes. Everlasting flowers were hung in there to dry, and sold for ‘threepence a bunch’ for school funds. Boys mowed the grass – ‘it was a big thrill’ to use the heavy cast iron motor mower.

The teacher in charge of the garden and gardening was WD (Bill) Campbell, who became a well- known naturalist, ornithologist, and writer. He came to the school in 1928, at a time when many schools had gardens. Under his care, Charlbury School’s garden became famous, and visitors came from all over the world, including China, to see it.