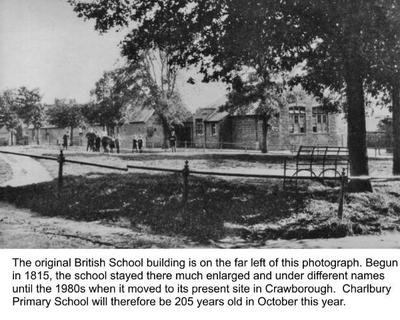 The History of Charlbury through …. a school money box

At first glance you might not realise that this is a money box with two slits in the roof to receive coins. Made by Jesse Clifford in the mid 19th century, it is modelled on the British School which was built on the corner of the Playing Close in 1815. Largely funded by prominent Quakers in the town, the school aimed to educate the poorer children of Charlbury. It was maintained by annual subscriptions from local people and children paid 1 penny each week towards their education.

Jesse Clifford was appointed in 1842 at the age of 26 on a salary of £40 per year and taught here until he retired in 1884 . To encourage the children to bring their money to school each week, he made this box so the children could post their pennies in every Monday morning.

At first the school consisted of one large classroom where all the children were taught together. The children walked to school but as there was nowhere for them to dry their clothes, they could be sent home early in very wet weather. Children were expected to be clean and tidy and sat on benches facing the teacher’s desk. The room was warmed by a stove which smoked badly in winter. The school originally taught children to read and write and to read their Bible but later other subjects were added – like history, geography, technical drawing and PE. Farming parents took children out of school when they were needed to help in the fields. The timing of the summer holidays varied, depending on when the crops were ready.

As now, there was no escaping the school inspectors. The inspector in 1863 was the poet Matthew Arnold, who commented: ‘Mr Clifford …. is an experienced, unpretending and hard-working schoolmaster’. Inspectors in subsequent years were not always so complimentary about the education provided but Jesse Clifford remained a very popular and well-respected Master and was known as the ‘walking Encyclopedia’.