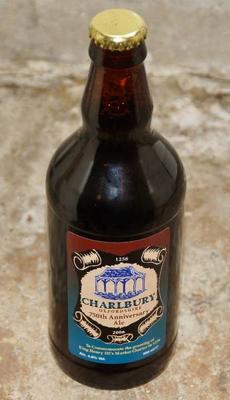 The History of Charlbury through .... a pint of warm ale

This Saturday should have seen crowds flocking to Charlbury’s 23rd Beer Festival, sadly cancelled this year because of Covid. So it seems fitting this week to look at an object related to beer and how it was drunk in the past. I was intrigued by an object looking like an oddly shaped metal boot on display near the kitchen range in the museum. It turned out to be an ale warmer, used for warming beer and ale before they were drunk.

Warm ale was popular as a winter drink when heated on its own or mulled with spice and sugar. The drink could be warmed by using a hot poker from the fire, thrust into the tankard of ale. But this could taint the liquor and two styles of ale warmer developed, probably in the 18th century. One was the boot-style that we have, where the long ‘toe’ was pushed into the embers of the fire so that the heat spread to the ale inside. The other style was a simple cone, also thrust into the fire. They could be made of tinplate, as in our example, or of more expensive copper which lasted longer and had better heat-conducting properties.

Many people thought that ale or beer was healthier drunk warm. A Treatise on Warm Beer published in 1641 stated: “….when I did always drink cold beer…I was often troubled with exceeding pain in the head….also with stomach-ache, tooth-ache, cough, cold, and many other rheumatic diseases…But since my drinking my beer (small or strong) actually as hot as blood, I have never been troubled with any of the former diseases, but have always continued in very good health constantly…”

All ale or beer was healthier than drinking water, which was often contaminated and spread diseases. Ale was made of malted barley, flavoured with herbs and spices, but in the late 14th century hops were introduced from the Continent and hopped beer began to be brewed alongside traditional ale. Occasionally beer was attacked as an alien drink not fit for ale-drinking Englishmen! Sadly we don’t know who our ale warmer belonged to but it would be good to imagine it being used in one of the many pubs and inns around Charlbury.