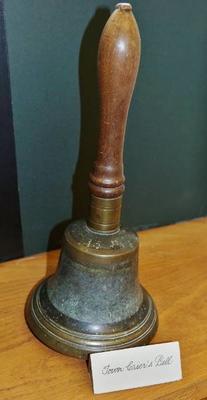 The history of Charlbury through.... the town crier's bell

How did Charlbury hear the news before the loud-speaker, the telephone, the internet and smart phones? The town-crier's bell often propped open the shop door at the Royal Oak when I lived there, and I was told about Billy Grace, a town crier who lived for a while in an attic at the Royal Oak. My aunt described him as having feet at ten to two, and he was the predecessor of our current town website, announcing such useful information as when the water supply would be cut off. Now the bell stands proudly on a cabinet in the museum.

The museum also owns a book, privately published and written by Amy Frances Gomm, "Water under the Bridge". Billy Grace spent much time with her family over the years. "We remember him as a thickset, shortish man not more than five feet. He always walked with difficulty, as if his boots were tight. He had a speech impediment, too - not a stammer - but an inability to pronounce words properly.... but he had the volume, if not the clarity, of voice. Billy was glad of the money, and if the authorities didn't have any other candidates.. The Call was the big hand-bell that Billy wielded. It might be a lost or found item; or somebody's dog or cattle had strayed; a public meeting had to be announced when some issue, local or national, was due for general discussion. It could be a magic lantern show, or a visiting singer or instrumentalist; or a needle match among the sporting fraternity. Billy would have the announcement written on the handbill he carried.

"Once he'd rung his bell, there would be the second string, his "retinue" to provide all the help he needed. It was a scramble to be first out at the sound of the bell to be head man, to lead the rest behind Billy to read the notice and intone the announcement, for the rest to hear. They would follow my leader through the main roads and through such secondary roads as seemed necessary, calling their message, unofficial, unpaid, but enthusiastic Town Criers."