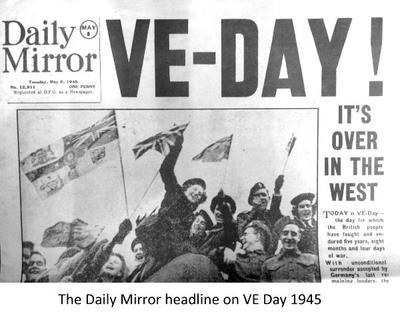 To commemorate 75 years since VE Day, we will be featuring three items over the Bank Holiday weekend, one each day.  The first recalls how VE Day was marked here in Charlbury.

Victory in Europe (VE) Day marked the end of the war against Nazi Germany in Europe in 1945. People were very relieved and thankful after six years of food shortages, bereavement and fear. The war continued in the Far East, and Victory over Japan (VJ) Day was marked on 15th August later that year. This year is the 75th anniversary of VE Day, and today is a special Bank Holiday.

The 1945 celebrations in Charlbury were described in The Leaflet.

"On Tuesday 8th May, many people went to a spontaneous Service at 11.30 am at St Mary's Church, and more to the Thanksgiving Service in the evening at 8 pm. The bells were rung after the Prime Minister's announcement at 3 pm. The army held a free dance in the Victory Hall in Church Street (opposite the Royal Oak and demolished in the 1960s)."

"On Wednesday 9th May there were sports on the Red Triangle Ground (now the cricket field near the station) for both children and adults.  The prizes were provided by the Charlbury tradesmen and distributed by Mrs Morris* in Church Street in the evening. An ENSA concert was given in Church Street at 8 pm and followed by open-air dancing until 1am. This was much enjoyed and was perfectly orderly. (We understand that only about one half of the child population was present at school the following day!)"

* Mr and Mrs Morris lived at Lee Place and bought the Corner House and its garden in the 1930s, originally for a girls' club. At the end of the War, Mr and Mrs Morris gave the house to the town as a Community Centre and the garden for a town hall as a War Memorial.

ENSA stood for the Entertainments National Service Association, which was set up in 1939 to provide entertainment for servicemen and women.

On Saturday we will look at Charlbury's own Dad's Army