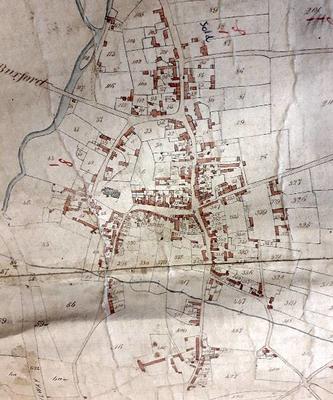 If you were able to visit the ‘Historic Maps of Charlbury’ exhibition in the church in June 2019, part of the Charlbury Festival, you would have seen a digitalised copy of the 1847 Tithe Map of Charlbury.

Since early times, tithes, a tenth of annual agricultural produce, were required to be given for the support of the church and clergy. Charlbury’s tithes went to Eynsham Abbey and to the vicar. After the reformation much of the land was in the hands of laymen or ‘impropriators’ and by 1847 the chief one here was the Duke of Marlborough.

The Tithe Commutation Act 1836 allowed payments of tithes in kind to be replaced by money payments. The map, and two copies, were made and used in the apportionment of rent in lieu of tithes. The award was confirmed by the Tithe Commissioners in 1847. These maps were paid for by the landowners and originally held by the diocese, the church and the tithe commissioners. The copy originally held by the church is now at the Museum along with its schedule. The other two are at the Oxfordshire History Centre and the National Archive.

The map shows the buildings and garden plots of the town, and the field plots and woodland along with the river, roads, footpaths and the railway (opened 1853). All plots are numbered.

The schedule, some 70 large parchment sheets, lists each numbered plot giving owner and occupier, use of land, arable, pasture, meadow, and area of land in acres, rods and poles. It also gives the rent charge and to whom it is paid, vicar or impropriator. The calculated rent for the vicar’s glebe lands is £686.

A fascinating snapshot of Charlbury.

For an excellent digital copy of the map visit