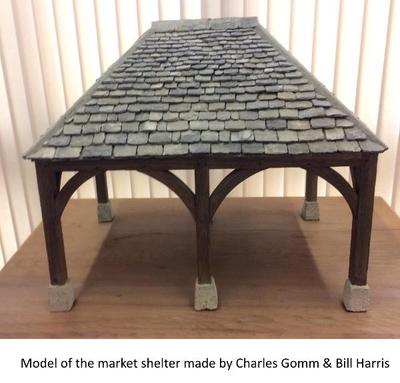 The history of Charlbury through .... the market shelter

I’m sure you will recognise this image of the market shelter which once stood at the top of Church Street and is used on the logo of the Primary School.  A model (see below)  was made by Charles Gomm and Bill Harris for the exhibition, held in 1949, which led to the forming of the Charlbury Society and the museum. It closely follows this rare early photograph of the shelter taken by Mr Baughan the ironmonger, whose shop you can see in the background. The model is beautifully made, with individual Stonesfield slate tiles on the roof.

Markets were central to the life of a medieval town, being the focus for trade, socialising, the exchange of news and information, and a way for landowners to raise money. Between 1200 and the Black Death, the kings of England established many new markets. This is often reflected in the name of a town: eg Market Harborough, Chipping Norton (chipping came from an old Saxon word meaning ‘to buy’).

Most of the land round Charlbury was owned by Eynsham Abbey, and in 1256 King Henry III granted the Abbot the right to hold a weekly market and a four-day fair in August. This gave them an income from the market tolls and rents. Charlbury’s market took place in what is now Church Street. Market houses emerged later as a focus for the administration of the market. It is likely that the half-timbered building on the left of the painting below was Charlbury’s Market House, with the simple open-sided building in front providing shelter for some of the market stalls. Stocks were often set up near the market hall and Charlbury’s stocks can be seen under the eaves of the shelter.

The shelter was demolished in 1871, without the consent of the town, on the grounds that it was obstructing the movement of traffic.