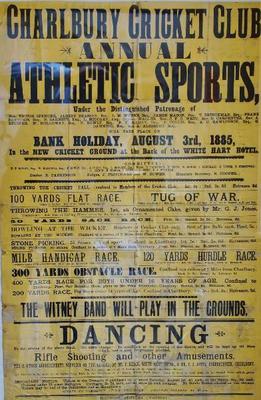 Looking at the 1885 poster, can you imagine the scene? Perhaps you could draw or paint a picture of all the activity. You will need to make sure that the Bowling, Hammer Throwing and Rifle Shooting are not too near the Witney Town Band and the Dancing!  And how would you play Stone Picking?

The Annual Athletic Sports were invented in 1874 by the local gentry "to relieve the monotony of life in a very quiet place". They continued right up to 1906, in all sorts of flat and hilly fields, and included horse and donkey races. In 1885 the New Cricket Ground behind the White Hart Hotel was used. This was the field "known as Nine Acres" which was rented from the private owners. In those days Nine Acres really measured about nine acres, and was more sloping until it was levelled in 1951 for football pitches and tennis courts.