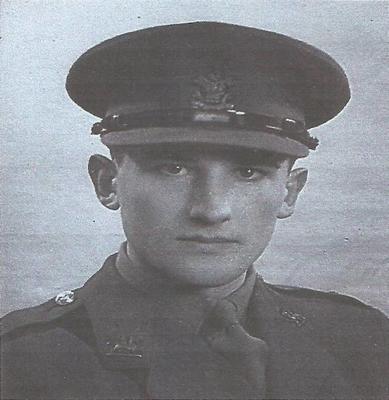 In the weeks after the Allied landings in France on D-Day, two Charlbury men were killed in northern France: Bill Parsons and Peter Ryder. Private Bill Parsons aged 22 years in the Airborne Division of Oxfordshire & Bucks Light Infantry died on 20th June 1944. Captain Peter Ryding aged 24 years in the 4th Battalion of the Welch Regiment was presumed killed on 3rd July 1944.  Read more about them inside the Museum.

Earlier that year Charlbury had witnessed the preparations for D-Day at first hand.

"In Cornbury Park the 22nd Vehicle Reserve Depot (one of the largest in England) had been set up in December 1941. The trees afforded good cover from detection by enemy planes. Three thousand vehicles arrived in four weeks: they were of every description, including jeeps, Red Cross ambulances, private cars painted khaki, vehicles needed to equip divisions going abroad... Roads and drives were churned up into a sea of mud, in places so deep that an ATS girl lost a shoe which was never recovered! The Vehicle Depot was in charge of .the Royal Army Ordnance Corps, assisted by a contingent of ATS........The RAOC took over all available accommodation for troops in the town, including the Victory Hall (In 2019 the site holds a private house in Church Street opposite Royal Oak cottage and next door to Baileys.).....

"In a very secluded part of Wychwood Forest, with no house within a mile, a large consignment of high explosives was parked in preparation for our invasion. It was transported and packed by black American soldiers. Shortly before D-day long lines of large bombs were parked on each side of the Burford Road and other munitions along the Enstone Road......"

The Corner House was requisitioned by the Army from 1939. In the Morris Room upstairs a British Restaurant was set up in 1942, and a dumb waiter was installed between the kitchen and the Morris Room "A School Meals service and a mobile canteen were provided, with a voluntary driver and helper, on a round of villages, depositing hot dinners in large thermos containers at small schools. .. From time to time tramping on the stairs warned the helpers of the arrival of soldiers, mostly drivers who had brought convoys of vehicles to Cornbury Park and who always seemed to have had nothing to eat for many hours. In the weeks before D-Day when troop movements mounted to a crescendo, soldiers of all descriptions were liable to appear mysteriously, including several parties of airborne men." In March 1944 the Restaurant sent out 1,581 dinners and 516 teas, plus 2,893 school dinners. Soldiers on convoy, lorry drivers and other travellers were very glad of the service. The red and green folding chairs used in the Restaurant can still be seen in the Museum, and others are stored round the top of the dumb waiter.

With quotations from the Charlbury War Record, a booklet prepared for a Women's Institute County Competition in 1946, in which Charlbury WI won fourth place. June 2019