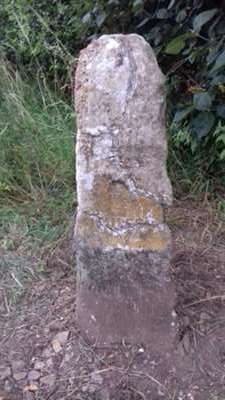 Have you heard of the 'Charlbury Triangles'? You might have spotted two of them in the past, when driving back to Charlbury on the Burford Road, but over the last two years they had both disappeared from view. They have been in situ since 1800, when the Turnpike Act required local communities to take over the upkeep of their roads; they were to erect milestones and toll houses in order to raise money for the purpose. The milestones on Charlbury roads are a distinctive triangular shape, hence the name 'Charlbury Triangles'. One of these, clearly visible on Forest Hill, had been run over by a vehicle and smashed into five pieces; the next, a mile further on, was overgrown with brambles, bushes and grass. Celia Faulkner, Curator of Charlbury Museum, arranged for the two milestones to be made visible again, with the cooperation of the national Milestone Society, Eddie Abbey, Peter Bennett and the Charlbury Society. The Milestone Society and the Charlbury Society have shared the costs involved. Milestone 1 on Forest Hill has been expertly repaired by stonemason Eddie Abbey. Milestone 2 in Biggerstone Hollow has been cleared of shrubs and brambles by Peter Bennett. Although the inscriptions on all milestones were removed during World War II in case of a German invasion, the base of Milestone 1 (previously underground) now proclaims "Walcott" and the base of Milestone 2 "Shorthampton". We hope that they will continue to mark the miles for another 200 years.