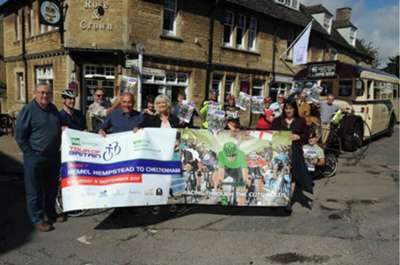 Cyclists, councillors and residents got on their bikes to mark the West Oxfordshire launch of the OVO Energy Tour of Britain race.

A special event highlighting the benefits the race will bring to the District when it passes through on 9 September was held in Charlbury.

As well as the impressive range of modern cycles and their riders, guests and visitors were able to view a penny farthing and other veteran machines while posing for pictures with a coach kindly provided by the Oxford Bus Museum which is celebrating its 50th year of vintage vehicle preservation at Long Hanborough.

Sally Graff, Tourism and Business Support Manager at West Oxfordshire District Council, said: "Everyone is so enthusiastic about the race coming to West Oxfordshire and we expect visitor numbers in Charlbury to rise significantly which will also boost local businesses and hopefully leave a lasting legacy."

More than 120 top cyclists will pass through towns and villages including Wootton, Charlbury and the Wychwoods before continuing through the Cotswolds, eventually finishing in Cheltenham town centre.

As part of the Charlbury celebrations, there will be big screen coverage of the race in the Memorial Hall; Charlbury Museum will feature a special cycling display while Dr Bike will offer a free cycle check and maintenance help. And there will be a special 'Ride the Tour' event for youngsters. The event will also coincide with the opening of the new £2m Community Centre.

Meanwhile, Milton-under-Wychwood has arranged a Decorate Your Bike competition, a family ride while it will also welcome cyclists in the Ride and Stride event being organised by the Oxfordshire Historic Churches Trust.

The lead cars are scheduled to arrive in Charlbury from around 12.49pm with the riders following shortly after and following through to Milton-under-Wychwood around 1.07pm onwards .
Cllr Jeanette Baker, Cabinet Member for Leisure and Health at West Oxfordshire District Council, added: "This will be an exciting event to watch but we are also keen to promote the health benefits of cycling to local residents and schools."

Charlbury Town Council Member Richard Fairhurst, who has helped co-ordinate activities around the visit of the race, said: "Charlbury is becoming a hub for cycling as it is at the centre of some wonderful roads passing through beautiful Cotswolds countryside.

"We also have some great cafés, pubs and churches which can become a focal point for people enjoying a cycle ride in the area. It also has a station making it easily accessible for visitors and locals alike."

To help promote towns on the tour route the tourism team have just launched a short social media film of Charlbury which can be viewed at youtu.be/7zHqkr8s2TE

The race is a major cycling event for the UK. It also has the potential to draw a large number of visitors and spectators, bringing considerable economic boost, increased overnight stays and provides the opportunity to showcase the Cotswolds. For example, in 2013 the Sidmouth to Dartmoor stage attracted 188,000 day visitors and 62,000 overnight visitors so Charlbury could be inline for a lot of visitors.