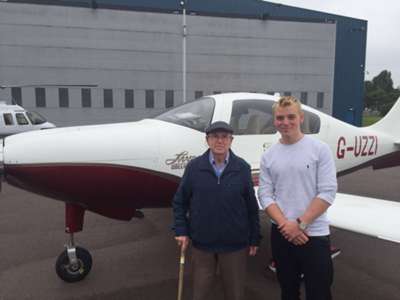 On Monday 14th August, Chris Willy, a long-time supporter of the Charlbury Community Centre and his grandson enjoyed a wonderful flight with Lord Rotherwick over Charlbury and its surroundings. 'My grandson particularly enjoyed sitting in the front and learning about some of the controls and various dials!' said Mr Willy after his flight experience. 'The views were magnificent despite the light cloud, and all in all we had a fantastic morning in the skies above Charlbury.'

Mr Willy won the flight, kindly donated by Lord Rotherwick, at a charity auction at Ditchley Park in aid of the new Charlbury Community Centre.

The Thomas Gifford Trust would like to thank Mr Willy for his enduring support and Lord Rotherwick for donating the flight and his time all in aid of the new Community Centre.