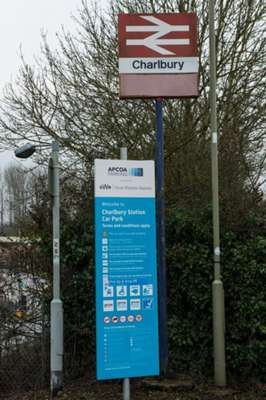 Following complaints on this website's Forum about unfair parking penalties being issued to drivers caught out by late running trains, I took up the matter with GWR management. As a result the injustices were put right. I agreed with GWR to revisit the situation three months on and to review progress. That review took place yesterday.

The following topics raised by Charlbury residents were put to GWR management and I await a response. When I receive a full response I'll post details on the Forum with a summary here.

1: What progress has been made in establishing a system of communicating details of delayed trains to Apcoa so that unfair penalty notices are no longer issued?

2: Request that the 20-minute 'no charge' period be extended to 40 minutes as late running services are frequently delayed by more than 20 minutes.

3: Request that the signage be improved to make the duration of the no-charge period very clear.

4: Request that drop off bays be provided and the existing temporary bay be significantly improved.

5: Request that car park and station lighting be switched off after the last train to reduce light pollution and save energy.

6: Ask for an explanation as to why Oxford Parkway does not appear on the list of destinations available on the Charlbury Station ticket machine.