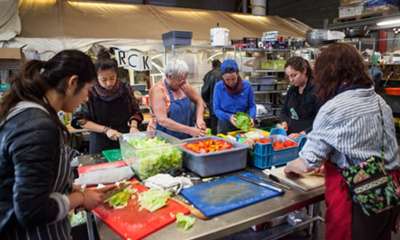 The razing and eviction of the camps at Calais and Dunkirk is imminent and unpredictable. The French say they will clear the Calais and probably the Dunkirk camps before the end of this month. That's now well over 10,000 people, of whom more than a thousand are minors. Over 300 of these have been found to be eligible for asylum under the so-called Dubs amendment, but the British government has refused to start the process of processing their claims. No one has said where any of these people will go.

Many of the residents are traumatised and severely depressed.

People have already begun to leave Calais because they are afraid of police violence, and are making their way to Paris where numbers are expected to increase dramatically in the next week or two.

Over 1,000 refugees are already sleeping rough in Paris, while a further 6,000 or so are in unofficial squats and shelters. The French authorities are withholding certain benefits, such as travel passes, to which they are entitled, making it very difficult for people to get to registrations and interviews across the city. Refugees caught travelling on buses or the metro without a ticket are fined 70 euros (which they do not have) and may collect a criminal record. Roughly once a month the police clear the camps from under bridges, flyovers etc and refugees often lose tents, bedding and other donated possessions in the process. This goes for everyone, mothers and babies included.

At our committee meeting on September 26 we felt the greatest immediate need to be in France, but we are also aware of the extremely serious situation in other parts of Europe, especially Greece, where we hope to be able to direct some of our aid in future as we have in the past.

We had raised £1200 to donate, and allocated it in equal portions to Calais Kitchens, Help Refugees and Phone Credit for Refugees.

The Feast of the Middle East which was held in the Corner House on Saturday 1 October was a resounding success, thanks to the simply amazing initiative and culinary skills of Alison Pritchard whose brainchild it was. It raised over £900 for refugee aid. So many people helped that we can't name them all, and it would be invidious to be selective! Let's just say that the event sold out a couple of weeks in advance, that over 40 people had an absolutely great time, and that there is another feast in the planning.

We have more fundraising activities in the pipeline. These include a series of Sunday afternoon classical recitals (the first on Sunday December 4 in the Memorial Hall at 3pm); our third all-day Art Café in St Mary's on the occasion of the Charlbury Artweeks Christmas Trail on Sunday November 20; and another evening of entertainment early in the new year.

Gene Teo Cooke's Thai and Chinese cookery class on Friday 14 October is fully booked, but if you are quick there may be one place left in the repeat class on Thursday November 10. Details at www.charbury.info/events/4309

You can give extra help yourself

We encourage individuals who want to give money to use a MyDonate site where possible, and to add Gift Aid: your money goes much further (by almost a third) than if you simply give it to CRAG. Please email us at charlburyrefugee@gmail.com for some suggestions. This is a very easy way that anyone can offer very practical help.

Letter to the Home Secretary

CRAG has written a letter to Amber Rudd protesting at the treatment of minors in the Calais camp. The letter reads as follows:

We are writing to express our concern about the unaccompanied minors currently living in the refugee camps in Calais, a concern which has become particularly acute since the French Government announced its plans to close the camps by the end of October. We would urge the British Government to ensure that all children eligible to be transferred to the UK are allowed to enter this country prior to the closure of the camps. If they are not transferred before the end of October then we fear for the well-being of these children who have already gone through so much.

We understand that Safe Passage UK has given the Home Office a list of 387 children eligible to come to the UK; 209 of these being eligible under the Alf Dubs amendment and the rest under the Dublin III asylum regulation.

We urge the British government to act quickly to expedite the admission of these children and would ask you to provide details of how this will be done and over what timescale."

This is in the form of containers shipped to Syria and Lebanon by the charity One Nation. Containers go monthly so the collection is ongoing. We are grateful to the Corner House for allowing us to have a collection bin there where smaller medical and first aid items can be left (but not prescription drugs or painkillers: if you have these to donate, please call 01608 811378 and we can pick them up). This includes wheelchairs, walking frames, crutches etc. Thank you so much to all the people who continue to donate.

Members of Witney Refugee Action are collecting items needed by people expecting to be evicted from the Jungle. They can be left at Waterstones bookshop during opening hours. No need to book; just turn up with bags and boxes. They will be driven to Calais by local volunteers. If you fancy a cheap day trip to Calais and back, let us know. We can fill your car! In Calais the warehouse is only a few minutes from the port or the Eurotunnel terminal.

Sleeping bags, tents, blankets, suitcases (with wheels) and large backpacks come top of most lists of badly needed items. Or click www.leisurefayre.com/section.php/86100/1/help_refugees to buy things for delivery straight to the warehouse. Among clothes most needed are insulated waterproof jackets in S/M sizes, especially for men. Many people bulk buy from SportsDirtect. To give money to the food providers in Calais so they can buy food cheaply in France, click mydonate.bt.com/charities/helprefugeesandrefugeecommunitykitchen Do add Gift Aid!

Check Witney Refugee Action's Facebook page for latest information. If you have difficulty getting to Waterstones, please let us know and we will help.

We are pleased to welcome new members to the committee, now a strong team of eleven supported by a number of other very capable volunteers. Thank you to everyone!

CRAG's first Annual General Meeting will be held on Monday 14 November at 8pm in the Green Room at the Memorial Hall, Browns Lane, Charlbury. All members are welcome: please come with your questions, suggestions and ideas.

Thanks to all of you for your interest and support. What could we do without each other?

You can also follow refugee news here and across Europe on our Facebook page www.facebook.com/charlburyrefugee You don't have to be signed in to Facebook to read the reports.