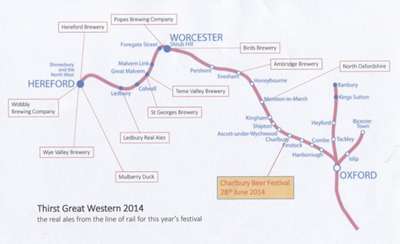 The theme for the 17th Annual Charlbury Beer Festival is 'Rail Ale', and we're featuring ales from along the Cotswold Line up to Hereford. On Saturday 21 June - exactly a week before the Beer Festival - we're doing what's been described as 'the ultimate beer run', collecting firkins from stations along the line and bringing them here in the guard's van of the 12.13 train from Hereford. We're due to get back to Charlbury station at 14.08 that afternoon, and the firkins will be loaded on to a vintage lorry.