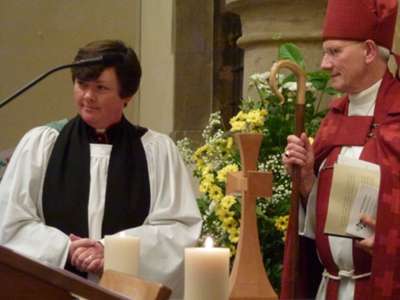 Charlbury's vicar, Canon Judy French, has been appointed to the newly created post of Archdeacon of Dorchester. The appointment means that Judy will be leaving Charlbury after 17 years at St Mary's.

The post of Archdeacon is the most senior currently available to female clergy in the Church of England. Its responsibilities include the church's buildings, the welfare of the clergy, and reconciling divided parishes.

Judy's last service here is likely to be at the end of May, after which there will be an "interregnum" until a new vicar is appointed - typically of six months or more. St Mary's is however blessed with the services of Revd Jan Fielden, also Area Dean, and several retired clergy.

Separately, the Chipping Norton Deanery is being reorganised; it has been proposed that Charlbury is amalgamated with the benefice of Chadlington, Ascott, Spelsbury and Enstone. A final decision on this has not yet been taken but St Mary's PCC has made a case that a Charlbury-based stipendiary priest should be retained.

(Photo of Judy with the Rt Revd Colin Fletcher, the Bishop of Dorchester, by Maureen Sparling from the St Mary's website.)